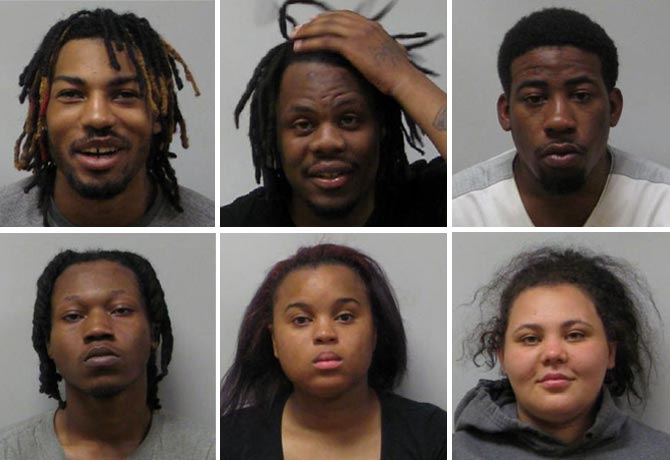 On Thursday (June 8th 2017) at approximately 12:20pm a resident of the 28100 block of Raleigh Crescent called the Chesterfield 911 Dispatch Center and reported seeing several males running from the Georgetown Apartment Complex to a brown Buick parked behind his residence. He stated the males were carrying a large flat screen television and had unknown items concealed under their shirts and that they had just loaded the items into the brown Buick and took off towards 23 Mile Road. A Chesterfield Township Officer spotted the suspect vehicle west bound on I-94 as it passed 21 Mile Road and stopped the vehicle on the shoulder of the freeway where he was able to observe (3) males seated in the back seat, with a 60” flat screen TV across their laps.

After review today by the Macomb County Prosecutors Office, all (6) suspects were charged with “Home Invasion 2nd Degree” (15 year felony). They were arraigned today at the 42-2 District in New Baltimore via video from the Chesterfield Township Police Department. Cash Bonds were individually ordered by the court ranging from $3,000.00 to $20,000.00. A parole detainer was placed on Derrick Crawford. All (6) suspects are currently being held at the Macomb County Jail.